Why are Democrats so stupid? 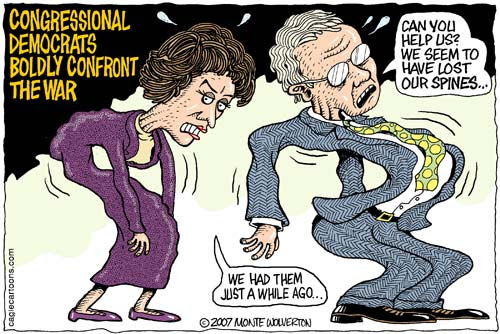 Put another mark in the "no shit Sherlock" column as the Washington Post reveals the results of yet another poll that shows a majority of Americans would like to see taxes on the very richest Americans go up, while keeping benefits like Medicare in their current form.  (http://wapo.st/g4bGH5)

To progressive Americans, this comes as no surprise as we have been yelling as loud and as often as we could for the past 10 years.  Americans are sick and tired of seeing massive tax cuts benefiting the likes of Warren Buffet, Steve Forbes, and the Walton Family, while the middle class sees its wages frozen and its benefits being chipped away.

As much as it pains me to borrow from the GOP talking points, this really does highlight a massive failure of leadership from President Obama, Senate Majority Leader Harry Reid, and the previous Speaker of the House Nancy Pelosi.  All three of them had the means to cut out the tax cuts for the richest 1% at any point in time between January 2009 and December 2010.  This could have been their big election issue going into last Fall.  They could have forced Republicans to vote NO on tax cuts for the middle class and held their feet to the fire...but instead they blinked as they always do.

The excuses that have come out of the Democratic party since the Fall elections have been that they had to act to save tax relief for the middle class.  But that's only because they failed to act on it sooner.  The first day back after the summer recess Democrats should have been hammering away at the GOP to pass tax relief for the middle class and the middle class only.  Leave out the estate tax breaks that will save the Walton family over $34 billion.  Forget about the keeping the marginal tax rates for the richest 1% lower than it's ever been since the creation of the income tax (it's not like any of them pay that rate anyway http://bit.ly/dL6mer).

But no, that's not what they did.  Instead, Obama, Reid and Pelosi tried to hang on by moving to the center.  And we saw how well that worked out for the Donkey.  One would think after the "shellacking" Obama and the Dems took in 2010 they would find some new vocabulary and really hammer home to people the importance of getting tax rates back to at least where they were under Clinton, if not pushing them back to where they were under the great Conservative himself, Ronald Reagan.  As Anthony Weiner said to Mike Huckabee "why should the guy working 70 hours a week on a construction job pay a bigger percentage in taxes than the do-nothing child of a millionaire who inherits a massive fortune?" (It's a really great clip: Anthony Weiner vs Mike Huckabee)
at 2:00 PM