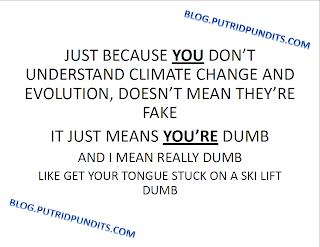 If you took a picture of this sign at the Stewart/Colbert Rally to Restore Sanity and/or Fear please comment with a link to the picture or email it to putridpundits@gmail.com.
Thanks and enjoy the sanity. 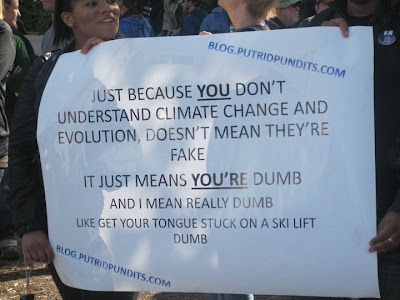 Grading 'Waiting for Superman' | The Nation

Grading 'Waiting for Superman' | The Nation
Here's what you see in Waiting for Superman, the new documentary that celebrates the charter school movement while blaming teachers unions for much of what ails American education: working- and middle-class parents desperate to get their charming, healthy, well-behaved children into successful public charter schools.
Here's what you don't see: the four out of five charters that are no better, on average, than traditional neighborhood public schools (and are sometimes much worse); charter school teachers, like those at the Green Dot schools in Los Angeles, who are unionized and like it that way; and noncharter neighborhood public schools, like PS 83 in East Harlem and the George Hall Elementary School in Mobile, Alabama, that are nationally recognized for successfully educating poor children.
Read More at The Nation
at 10:31 AM No comments: 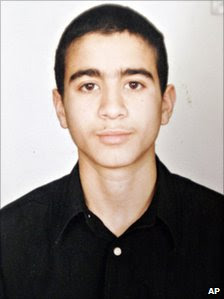 On July 27th, 2002 a fifteen year old child was wounded and taken prisoner by American forces in the village of Ayub Kheyl, Afghanistan. During the firefight that preceded his capture, Khadr was shot twice in the back causing gaping wounds in his chest that would still require treatment 10 months later.
For the next few months he was held at Bargram Airbase, the site where much of the known harsh interrogation, or torture took place. It was there that the worst torture the 15, then 16 year old Khadr faced in detention was carried out. But it didn't end there. In October of 2002 Khadr was transferred from Bagram to Gitmo where he has languished for 8 long years. He is now the last detainee at Gitmo with a Western passport, and the only detainee captured on the battlefield to be tried for murder.
The mere fact that Canada is the last country to remove its citizens from the torture and abuse prone facility that is Gitmo is shameful enough, but that this detainee was a child soldier at the time of his alleged offense makes this a truly unforgivable dereliction of Canada's duty, and responsibility to its citizens. It is generally understood in the international community that child soldiers, even if they commit heinous acts, are themselves victims and should not be prosecuted as though they are adults.
In a decent society, the reason for punishing people who have committed offenses is that they had a choice and they chose to violate the law. But what choice did a teenage Omar Khadr have? His father took him to Afghanistan as a child. Once there, what were his options? He had none.
No...there is no justification for his treatment first by his father by bringing him into the world of Islamic extremism, then by his American captors for torturing him and denying him proper treatment as a child soldier, and finally by the Canadian government who could have requested he be repatriated as every other Western nation has done for their citizens in American detention.
After 8 long years in detention, Omar Khadr may well be a hardened Muslim extremist today, but if he is, then he is one of America's making. When he was first apprehended, at the age of 15, he was a child thrust onto a battlefield not of his making and should have been rehabilitated, not tortured.
at 3:55 PM No comments:

I haven't seen it yet, so I'll keep this short. From everything I've seen so far about this new documentary that everyone talking about education is incessantly promoting, I can't help but feel like the anti-teacher establishment is getting ready to kick the union in the balls. That being said, I do plan to see this as soon as it arrives to a theater near me but people should consider the following when seeing this movie.
Teacher Evaluations
To say we should not have protections for bad teachers is an easy statement to make, but how do you determine what is or isn't a good teacher? For the last 10 years that has been almost entirely based upon student test scores on standardized tests. That is a terrible way to evaluate a teacher and provides almost no means to evaluate any teachers who do not teach math or language arts. Everyone should be in favor of rewarding "good" teachers and removing "bad" teachers but no one has been able to come up with a fair and decent way to make that judgement.

So long as we are basing teacher performance on students' standardized test scores, we create a disincentive for teachers to work together and learn from each other. Every teacher will be going after that performance based pay bonus and will be unwilling to share helpful advice with their fellow teachers. It is easy to attack the teacher's unions but it is much more difficult to come up with a better way to evaluate teacher performance.
at 5:41 PM No comments:

Farewell Rick Sanchez, it was just a matter of time 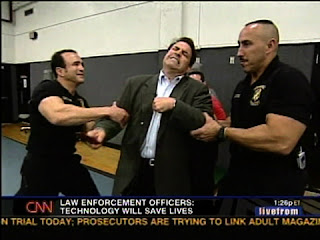 Goodbye Rick Sanchez. After years of making a complete ass out of yourself you went a little too far in your rant about all those people like Jon Stewart who run things and aren't an oppressed minority.
While it's certainly a shame that CNN dismissed Sanchez for what was one part imbecilic inaccuracy (Jon Stewart is a bigot) and one part unthinking Jew-baiting frustration (people like Jon Stewart run the media) the fact is that Sanchez does not belong on a news network...unless perhaps Johnny Knoxville has started a news network.
Rick Sanchez had a lot to say last week about Jon Stewart, the intellectual elites and his own father's history of doing manual labor for a living to make a better life for his family. That last part is extremely admirable, but what I think Sanchez's biggest offense through his time at CNN has been his extreme waste of potential. Sure, by his own admission he didn't grow up in a highly intellectual environment but he made it all the way to CNN, and even if it was a temporary gig to hold an audience between Campbell Brown's departure and the Spitzer/Parker tag team (think that costs extra?) he did have a nationwide 8pm time slot on CNN. But he squandered it.
Instead of using his ability to connect with his audience and educate himself and the people watching his show, he just kept up with the same buffoonery that made him the target of all sorts of people, from Jon Stewart and Stephen Colbert, to President Obama during the White House Correspondents' Dinner. But really, the saddest part of all this, is that no matter how dumb or circus-animal-like Rick Sanchez appeared, he's not the worst person the air by far. Probably not even the worst person at CNN.
Funny, for a guy who covered social media and the information age's capacity for disseminating knowledge, it almost seems like he didn't realize anyone would hear his comments on Pete Dominick's radio show.
Lastly, here's an interesting column by someone who worked with Sanchez at CNN.
http://www.businessinsider.com/some-rick-sanchez-insights-from-a-former-cnn-producer-2010-10
at 6:03 PM No comments: 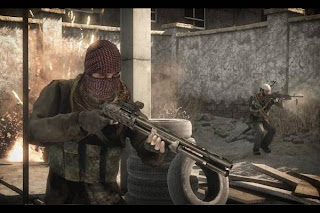 While this should not be a political issue, the frenzied screams of America's "value voters" has done an unbelievably stupid thing in forcing Electronic Arts to modify their upcoming Medal of Honor video game. For those who haven't been following this fiasco, EA's new Medal of Honor takes place in Afghanistan, a significant departure from their typical subject matter: World War II. The controversy with this newest game erupted when morons like Jack Thompson decided to try and censor the game by attacking their inclusion of "Taliban" as one of the playable options in multi-player mode.

For the benefit of you readers out there who are not familiar with "first person shooter" games, they typically consist of a single-player mode with a story that the player moves through. This often has cut-scenes, bits of dialog and other entertaining moments to give the player's twitchy fingers a bit of a breather, as well as provide the ears a break from the constant sound of gunfire. What "shooters" also tend to include in there, is a multi-player mode in which gamers can play either against each other in the room or against opponents over the internet. Here there is no story, no cut-scenes, no scripts. There is only killing the other players and staying alive.

With this new found understanding of "shooter" games, I would now like to point out the absurd substance of the complaints. Jack Thompson and his idiot think-alikes were outraged that in that multi-player mode, along with being a US soldier, a soldier from another NATO country, and maybe even an Afghan Army soldier, EA had put in the option for players to play as a "Taliban" fighter in multi-player mode. It is a pretty well established standard in the "shooter" genre to use the same characters that are in the single-player mode for the multi-player with obvious savings in programming and art design.

Now, let's imagine that the option is removed from the game. The Taliban is no longer a playable option in multi-player but multi-player is still part of the game. What does that really mean for the game play? Now players are all US soldiers running around killing each other. Is that so much better Jack? Would you prefer that people in multi-player mode run through the maps shooting other American or NATO soldiers? And it is exactly this kind of thoughtless argument that these "values voters" or religious extremists put forward that show how utterly moronic their viewpoints are.

So now EA has yielded to the pressure of these half-wits and is doing a "find/replace" on the word Taliban in their multi-player mode and replacing it with "Opposing Force." Maybe if these nuts had focused a bit of this energy on preventing real life violence (invasions of Afghanistan and Iraq) then EA wouldn't have based their game on Afghanistan and the Taliban. Congratulations Jack Thompson, you're a dumbass.
at 12:28 PM No comments: