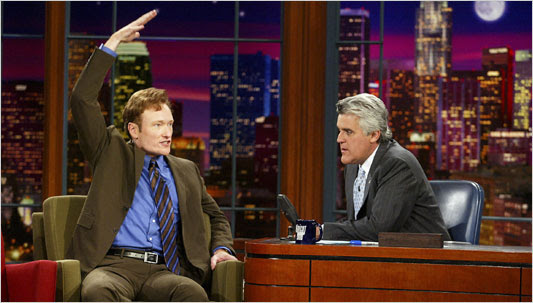 It's official. Conan is leaving NBC's The Tonight Show after only 7 months on the air. Why? Because Jay "the douche bag" Leno had a smarted manager and legal team when his contract was written. Unlike Conan, Jay actually had the time slot designated in his contract, so if NBC wanted to move him to placate their local affiliates (whose news ratings Jay was killing) they would need him to agree to the move and sign a new deal or risk having to pay him $150 million.
The end result is a much less funny late night show on NBC that appeals to the elderly and the dumb. Because seriously, if your idea of humor is watching a bobble head bounce around and chuckle at his own jokes all night then you deserve to watch Jay.
Now I must admit, I am not a regular viewer of the late night shows. Given their need to churn out material on a nightly basis, and the push to sell whatever crappy movie the guest that night is in, much of the show (any of them) is pretty boring, but consistently, the bits that Conan has been doing at the top of the show and up until the first guest is on has been the best of the 4 main late night shows over the past decade. And when it comes to guest interview moments the best ones have almost always come from Late Night with Conan O'Brien when he allowed some comedian buddy of his to sit in on an interview with someone promoting their crappy movie (case in point below).

So farewell Conan. I hope you get another show soon and I hope that Jay Leno's cars all rust apart and that his core audience finally figures out how to change the channel (old people are bad with remote controls) and NBC pays dearly for this mistake. They don't really have any decent shows left other than Thursday night's lineup so to hell with them.
at 6:33 PM