Overt and Covert Racism

After far too much complacency by all parties involved I was thrilled to see Representative John Lewis' remarks last week about the tone of the McCain/Palin rallies and their campaign. The most upsetting thing about his remarks is the response they have received by McCain's camp and most of the media. At the same time that images like the Obama bucks are mak

ing their way into GOP publications and website the McCain campaign has the audacity to act the injured victim in this and denounce the honest words of John Lewis as "shocking and beyond the pale."

The facts are these:
1) McCain cannot win this election without a strong turnout at the polls by the ugliest aspects of America, namely the racists and biggots of this country that are too ignorant and hateful to help themselves and their country move forward.
2) For every action Senator McCain takes to "rein in the hateful element at his rallies" Governor Palin gives as many if not more speeches that stir up that sentiment he is purportedly disagreeing with.
3) McCain's "denouncements" have not even denounced the racist tenor of his supporters. Case in point, when the slow witted woman in the red shirt stuttered through her idiotic comment about Senator Obama, John McCain's response was that Obama was not an arab and was in fact a decent man. He failed to address t 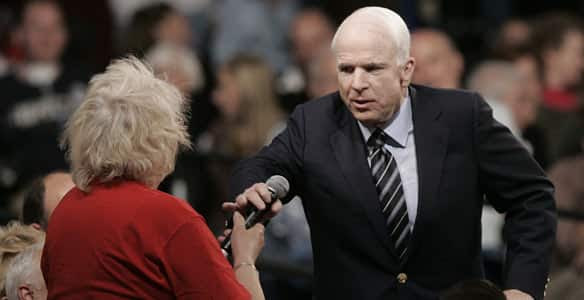 o more serious problem with his supporters and their overwhelming belief that arabs are not decent people and are, due to their ethnicity, horrible dangerous people who do not love their families.

So given these facts the climate of this campaign will only get worse and America should be ashamed of itself for treating 3.5 million of its citizens (who are of Arab descent) with this kind of hatred and distrust. It seems to me that if you're going to go after Senator Obama for having a fundraiser at Bill Ayers' house or for serving together on a board dedicated to reforming education then perhaps you should make sure that your own supporters don't own a bunch of white sheets and hoods.
at 10:08 AM