Hannity's America (a place I would never want to live) 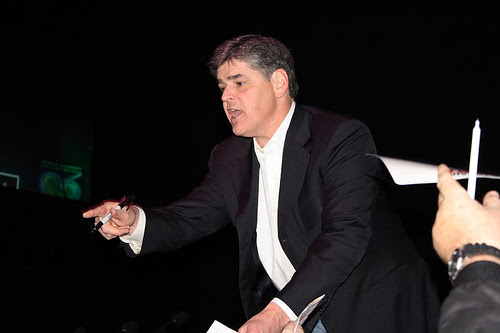 Sean Hannity's America is a terrifying place.  Let's ignore for a moment the fact that his Sunday night show's theme music is Martina McBride's "Independence Day" which for anyone who hasn't heard it is about a little girl who's mother is beaten to death by her father on July 4th.  Let's ignore that he is a shameless partisan hack that makes Tucker Carlson seem as impartial as a PBS news anchor.  Let's even ignore his fixation on any negative Obama news story that made him talk about Jeremiah Wright for months after the rest of the MSM did and his continued attempt to bring down Obama by talking about William Ayers every chance he gets.
Tonight he spent his entire broadcast going through a top ten reasons why he won't be voting for Barack Obama come November 4th.  He could have condensed all of his make-believe reaons that he went over in the show into a 30 second add and saved us all a lot of time.  Here's your real number one reason for not voting Obama: "My name is Sean Hannity and I work for Fox News."
If associations are so important to you Sean why not mention Senator McCain's longtime connections to convicted criminals like G. Gordon Liddy?  That's why we as a nation typically shun the idea of guilt by association because throughout your life, especially a public life, you are bound to meet and work with a huge number of people.  One of the bigges travesties of all the Obama guilt by association nonsense has been the lack of defense of the people and organizations that he is criticized for knowing.
Beginning with Pastor Wright, the outrage at his remarks were exageratted.  His sermons were honest and if they were hurtful to white Americans like Sean it was because of the truths they exposed.  Then came the Rezko nonsense.  Everyone who had anything to do with politics in Chicago and Illinois came into contact with Rezko or someone like him.  Now it's Bill Ayers, who did what he did because of his opposition to the murder of 2 million south east asians during the Vietnam war.
So let's move off of this garbage and take a look at the issues.  Yes Sean, your taxes will go up if Obama's plan goes through, but 95% of your viewers will see more of their money stay in their wallets, which will in turn allow them to spend that money on your crappy books.  If those making less than $200,000 get to keep more of their money then they get to purchase more consumer goods which help those that produce the goods.
at 11:13 PM