What to do about: Banker's Bonuses 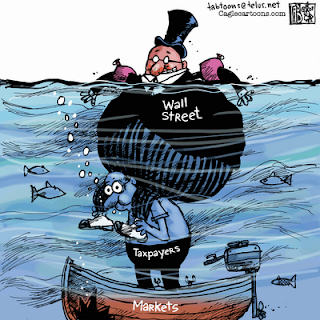 Mere minutes after the capitulater in chief held a special conference with the country's top bankers it became apparent that his tough talk on CBS's 60 Minutes was nothing more than talk. While he seemed to be quite upset about the large bonuses being paid out by banks that have just repaid their TARP money, he seems unwilling or unable to do anything about them.

President Obama's ability to think things through may be the biggest hindrance to really nailing the bankers and their obscene bonuses to the wall. After all, how can he seriously denounce a practice that his own economic advisors have helped to create and reinforce during their years in the private sector? No, Obama does not really want to do anything about the bonuses but rather would like to appear, to the American public at least, that he is angry and that he is going to make them do something good for the country to make up for it. Good luck America.

What he really needs to do is follow the UK's example and say "fine, you want to give out big bonuses? Well, we'll take big taxes." The UK is likely to raise over a half a billion pounds by slapping a 50% tax on all discretionary bonuses over £25,000. One of the biggest arguments the banks are making right now to support their bonuses is that if they don't pay them, they'll lose their top talent. Well, with a measure like this all banks will have to reconsider doling out those big bonuses or risk paying dearly in new taxes. If they still want to give their top executives those hundred million dollar bonuses they can, but then the taxpayers (we the people) get a taste.
at 11:01 AM