NY - DO NOT RE-ELECT THIS MAN 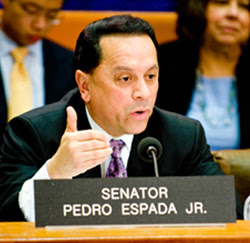 For the past month, citizens of the Empire state have had to watch as their state senate ground to halt thanks to the bumbling power grab by State Senator Pedro Espada.

For those who haven't been following, Pedro Espada and girlfriend stabbing senator Hiram Monserrate departed from the Democrat caucus in the beginning of June and joined the Republicans reversing the 32-30 majority that the Democrats controlled. This led to the month long battle between the two parties and "accidental" Governor Paterson.

Thankfully it has since been resolved with both morons returning to the Democratic caucus and allowing legislation to resume, but not before jeopardizing the budgets of numerous municipalities as well as wasting New York state tax payers hundreds of thousands of dollars in state senate salaries and expenses.

Now, the turn coat has been appointed Majority Leader of the party he abandoned. While I am glad that this impasse has been cleared it churns my stomach to think that this fool actually came out ahead in all of this. I hope that when his term is up, the good people of New York's 33rd district have the good sense to bump him out of there and replace him with someone who cares more about his constituents than about senate titles.
at 4:03 PM